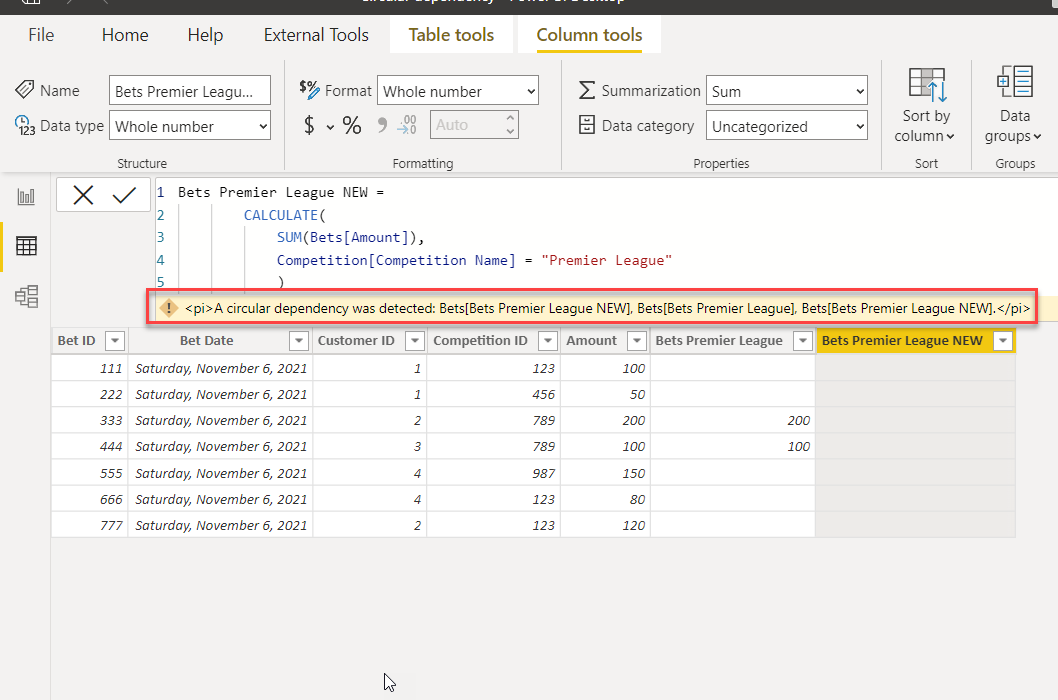 As you may have already understood reading our previous articles in this series, creating a Star-schema doesn’t necessarily mean that your data modeling tasks are completed. There are many more aspects to be aware of – and, while you can sneak without fine-tuning each and every detail – some of these “details” are of course more important and require better understanding.

One of the “details” that can easily draw you in the “whirlpool”, is called – circular dependency! I’m quite sure that all of us were at least once (hopefully it was only once) annoyed with the message: “A circular dependency was detected…”

But, before we proceed to explain what is a circular dependency and why you should care about it, let’s first understand…

What is a dependency at all…

Dependency is, as the name suggests, a fact that one thing (or event) depends on the behavior of some other.

This is a so-called regular dependency, which exists in every programming language (and in everyday life too). However, what happens if the bus ticket price changes? Does that necessarily mean that fuel price will also change? No! Bus ticket price IS dependent on the fuel price, but not the other way round!

Why did I ask that? Because there are certain situations when there CAN be a mutual dependency between two facts or events.

Fine, now that we know what circular dependency is, let’s examine why it occurs in Power BI, and how we can eliminate it. As you may assume, Marco and Alberto already written an excellent article about the internals of circular dependencies in DAX, so I encourage you to go and read it to get a better understanding of this “feature”.

Let’s run a very basic use case, and create a computed column in our data model with the help of CALCULATE() function.

As you may see in the illustration above, I have a simple data model, consisting of two tables: fact table Bets, which stores the data about the bets made by our customers; and Competition dimension table, that holds the attributes of the competitions.

Let’s say that I want to enrich my data model with additional computed column, which will calculate Bet amount only for competition Premier League. Easy job!

And, once applied, here is how my Bets table looks:

That’s cool, right? We are sure that this works, so let’s go and try to create another identical column:

Wait, what?! Isn’t that the formula that perfectly worked a minute ago?

Let’s delete both new columns from our data model, switch to DAX Studio and try to understand the query plan that Formula Engine generated:

Just pay attention to the Line 1 of the logical query plan, which informs us that our new column depends on all the existing columns from the Bets table! We would expect that the new column Bets Premier League depends on the CompetitionID, which is the foreign key to our Competition table, where we are applying our filtering. But, that’s not the case. Why is that happening?!

As we are creating a computed column, our expression is being evaluated row by row (row context). When we use CALCULATE inside a row context, the function applies a context transition and therefore we have a filter on all the columns in the scope!

To put it simple, this is a pseudo-code for our calculation:

And, that works fine, as you might have seen. But, what happens when we want to create another column with the same formula:

As in the previous case, NEW column depends on all the original columns from the Bets table – however, it additionally depends also on the Bets Premier League column we previously created! As this column is computed at the refresh time, Power BI can’t resolve this dependency and complains about circular dependency.

To put it simple, if you were able to create these two columns in your data model, this is what would happen once you refresh the dataset:

This problem can be easily solved by extending original column expression and using REMOVEFILTERS function to remove all the filters applied because of the context transition:

Once applied, Power BI doesn’t complain anymore about the circular dependency and NEW column becomes a part of the data model:

Ok, we solved this challenge, but let me show you what would happen if I tried to create a computed column with the same formula in the dimension table, instead of within the fact table.

I’ll go to Competition table and paste the code for the Bets Premier League computed column:

What the heck is happening here?! The same code that was previously causing “circular dependency” error, now works as a charm!

However, as explained in this article from SQL BI, this “technique” of creating computed columns in dimension tables to avoid circular dependency issue is not a recommended practice, thus should be avoided whenever possible.

Circular dependency is one of the most annoying things in Power BI data modeling process! Whenever you create two objects that are dependent on each other, you risk running into this issue. Sometimes, determining what is the root cause may be a straightforward task, but in certain scenarios, it is necessary to understand nuances of the DAX way of doing things.